The Alarm Button is a multifunctional NMEA 2000 device with wires for connection of an external button with an LED indicator and a standard 4 or 8 Ohm sound speaker. It contains a 10W audio amplifier inside and a bank with 28 sound signals (car anti-theft alarm, ship horns, whistles, tone signals, etc.).

Figure 1. The device with connected speaker and button with integrated LED (back view)

The device can be configured for one of the following functions:

This device is for you, if:

With the help of NMEA 2000 Wi-Fi Router or NMEA 2000 Wi-Fi Gateway, you can manage sound alarms from mobile devices or PC using Web Gauges (no software installation required). These devices also allow updating the firmware, uploading of user sound files and configuring advanced settings of the Alarm Button. The selection of the mode and volume control are also available from connected button. 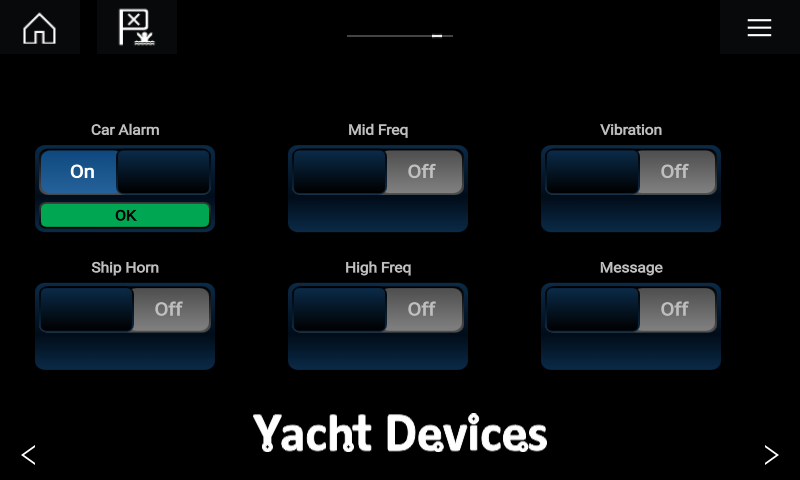 Six sound alarms (from 28) of the device can be managed from a modern MFD with CZone support (B&G, Simrad, Lowrance, Furuno, Raymarine Axiom, eS and gS series), see the Figure 2. Visit this page to download the configuration file for your MFD and get instructions.

Four sound alarms can be managed from hardware buttons connected to the Switch Control, it also displays states of channels with integrated and external LEDs. Two or more Alarm Buttons in digital switching mode will work synchronously with factory settings; this can be used on a large vessels. To work independently, in the settings you need to set unique bank numbers.